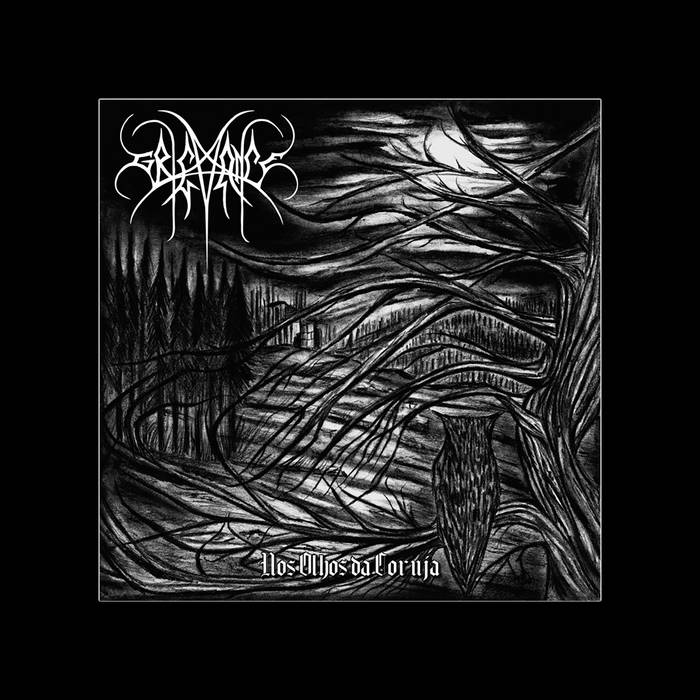 The nightly landscape where the owl ominously watches the ruins of the past is based in Koraxid's nightly strolls over the Portuguese western-central landscape. The memories of his ancestry and the nightly worship are entwined beneath the full moonlight and serve as a visual enhancement of the soundscapes presented in this album...

"Every night i travel through the ruins of my ancestors, shapeshifting into an owl, remembering all the blood spilled in this lands, for mankind not to fall again in all its history’s mistakes...

Once again this not a conceptual album but a stand-alone track, wich inspired the cover art and the album’s title, as happened in the 3rd Grievance Album “Em Lucefécit”, but all the other tracks are somehow connected to this theme, wether by a call for inner-awareness and power as well as some other historic reminders of all the tragedies that helped shape our world."

A design made by the artist Diana Silva (www.instagram.com/diana.silva.art/)

A very dark and heavy sound starts off the album along with some angry yet grim sounding black metal screams a few seconds later. When the music speeds up a great amount of tremolo picking and blast beats can be heard which also gives the songs more of a raw feeling and the solos and leads are also done in a very melodic style.
occultblackmetalzine.blogspot.com/2020/11/grievancenos-olhos-da-corujavoid.html

Hang on to your bits metalheads because today we will take a deathly plunge and plummet to the lowermost levels of the Portuguese underground to explore “Nos Olhos da Coruja” (In the Eyes of the Owl). This is the new, imposing aural work and fourth full-length release from one-man black metal act Grievance. The album is due out tomorrow and physical copies will be strictly limited to 200 six-panel digipacks, distributed via both Void Wanderer Productions and War Productions.
www.blessedaltarzine.com/2020/12/03/grievance-nos-olhos-da-coruja/

So this one is a new one for me. Grievance from Portugal. Just by looking at his discography, I knew I was in for some experienced black metal. Since 2013, Grievance has been a one-man project and has been around since 1997. He has released 3 full length albums before this so he knows what he is doing music wise.
good-music-promotions.webnode.nl/grievance-nos-olhos-da-coruja/

As for the new record, titled “In the Eyes of the Owl” (cool title, by the way), I must state that I am fairly disappointed by the sound itself. Production has almost completely gone sideways. A whole lot of bass is involved. Drums and vocals dominate, while the guitars are almost in the background. Pity, especially since the guitars are often crafted with immense imagination and skill. They do come to the surface on occasion, but still manage to sound a bit shy and in need of a bass guitar support. Which is abundant throughout.
www.abaddon-magazine.com/reviews/review-grievance-nos-olhos-da-coruja/

The eight songs stick together nicely and Mr. Koraxid knows more than enough to evoke the atmosphere of the old days. The speed is kept reasonably high. Not necessarily with the typical blast, but more with the rolling drumkicks. Draped on top of that, you get a whole arsenal of simple, typically monotonous sliding riffs that we have heard many times, but still. It is also the dry throat of Koraxid that makes the record pleasant to listen to.
zwaremetalen.com/albumrecensies/grievance-nos-olhos-da-coruja